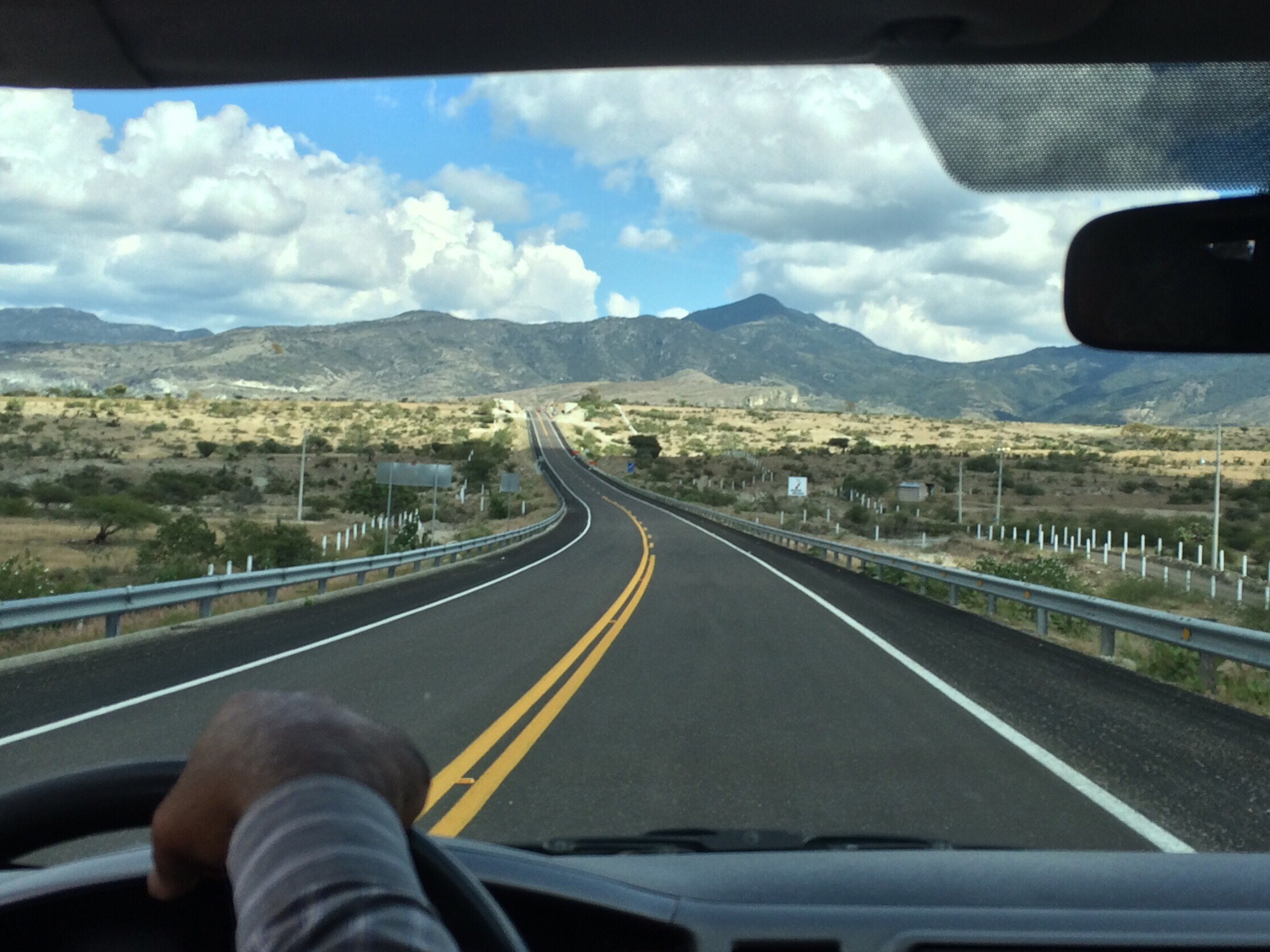 There are many times while traveling when I find myself thinking ‘What the pants am I doing here?’ I might be laying on the sea floor watching a manta ray circle just a few feet above or watching Swedish police raid the squat where I’m staying in Malmö or having my palm read by a Turkish waiter in Istanbul. It can be unsettling or hilarious or exhilarating. Our time in Oaxaca mostly fell into the ‘hilarious’ category.

Walking into Hostal Azul Cielo off the dry streets of Oaxaca after another long overnight bus ride was the first surprise. Oaxaca’s cobbled streets feel dusty and dry and trees are a rare sight outside the zócalo. We entered the hostel through a garage and were greeted by an unexpected slice of paradise including a lush green garden, tile mosaics, hammocks and an open kitchen.

A day trip to some Zapotec ruins offered a couple of other gems. The first stop on our tour was El Árbol del Tule. This tree is claimed to have the widest trunk in the world. Okay, now what?  I’m on board with how impressive that is but I’m not sure what to do with it. The tree is behind a fence in a churchyard which is behind another fence. You can pay MX$10 to get past the first fence but the second one is non-negotiable. So I can’t even hug the tree? Why so aloof, Mr. Tree?

Next up, a textile studio. Oaxaca has a long history of producing beautiful, vividly dyed and finely woven textiles. Because I am a totally normal and not at all strange person, at some point in my life I read an entire book on the history of cochineal, the red dye traditionally produced in this region. The dye is made by squooshing bugs which live on a particular cactus. Super not vegan, but fascinating nonetheless. At the time cochineal was discovered by the Spanish and introduced to Europe, red fabric was highly prized by the aristocracy and thus incredibly valuable. As a result other dye makers in Europe and England were left desperate and broke due to frustrated attempts to discover the secret of the bright cochineal crimson. Riveting, no?!

Just across the highway was a mezcal distillery. Uh oh. Mezcal is a traditional Mexican liquor made from agave (tequila is a type of mezcal). We spent a very short time learning about the distillery process before moving to the bar. Mezcal is meant to be sipped and is often paired with a complementary flavour like orange slices or crushed beetles with chili powder. We also tried a range of crema de mezcals – there were about 20 different flavours ranging from milk based chocolate and coffee flavours to fruits and nuts like tamarind, mandarin and almond.

There’s a great quote about mezcal: Para todo mal, mezcal, y para todo bien, también (For every ill, mezcal, and for every good as well). I naturally made it my mission to try every vegan flavour (twice) so when our guide starting peddling bottles like a man who makes a commission for every unit sold, my arm was easily twisted. When I bought the final bottle our guide Iloy made a ceremony out of giving me a shot glass on a string, blessing me as he put it around my neck.

Later as we got back on the shuttle Gill asked, “What are you doing?” I looked up and innocently replied “Licking the alcohol off my elbow.”

After the distillery we headed to one of the world’s few natural infinity pools. Some comic genius had left a CAUTION – WET FLOOR sign beside one of the pools. I nearly died laughing. Maybe you had to be there. From the pools we had a glorious view of the petrified waterfall Hierve el Agua and the lush valley below. As we were sitting near the edge a couple of vultures landed just a few feet away and chilled with us for a while. No biggie. Totally normal day. After swimming I got changed behind a cactus even though it offered almost no cover because, well, if you need me to tell you why that’s cool then we probably shouldn’t be friends.

By the time we got to the ruins of Mitla it felt almost like an afterthought. And I’m done writing anyway so. Yeah.